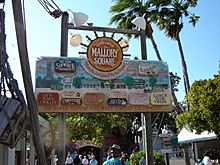 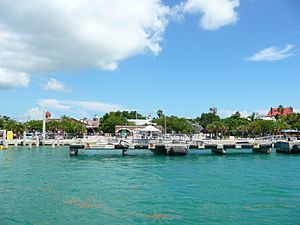 Mallory Square as seen from the Gulf of Mexico. Downtown Key West can be seen in the background.

Mallory Square is a plaza located in the city of Key West, Florida, U.S.

It is located on the waterfront in Key West's historic Old Town, adjacent to the cruise ship port. It is located just west of the northern end of Duval Street, facing the Gulf of Mexico. It runs the entire length of Wall Street. Adjacent to the square are the Key West Shipwreck Historeum Museum and the Old Post Office and Customshouse.

Mallory Square is the location of the "Sunset Celebration", which is considered one of the main tourist attractions of the city. The Sunset Celebration involves hundreds of tourists who arrive each night to view the sunset. The celebration includes arts and crafts exhibitors, street performers, and food carts. It begins two hours before sunset, every day of the year.

In 1984, the city opened a pier right on Mallory Square. The decision was met with considerable opposition from people who felt it would disrupt the tradition of watching the sunset at Mallory Square. In response to this, the city passed an ordinance requiring cruise ships to leave port two hours before sunset, enabling them to return after sunset without an additional docking fee.

All content from Kiddle encyclopedia articles (including the article images and facts) can be freely used under Attribution-ShareAlike license, unless stated otherwise. Cite this article:
Mallory Square Facts for Kids. Kiddle Encyclopedia.