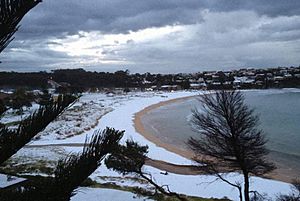 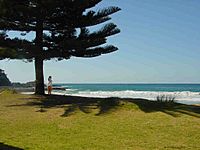 The surf at Malua Bay

Malua Bay (postcode: 2536) is a locality in the South Coast region of the state of New South Wales, Australia. It is situated in the Eurobodalla Shire. At the 2006 census, Malua Bay had a population of 1,907 people.

Malua Bay town centre is located astride George Bass Drive, which is approximately 13 kilometres drive from the town of Batemans Bay. The town boundaries extend to Dunns Creek Road in the West, Ridge Road to the North, and almost to Burri Road in the South, where it abuts the town of Rosedale. Malua Bay is approximately 280 km (170 mi) South of Sydney, and 160 km (99 mi) East of Canberra via the Kings Highway.

Malua Bay has a range of beaches and bays on its border with the Tasman Sea, including; Malua Bay Beach, Mosquito Bay, Garden Bay, and McKenzies Beach. Recreational fishing is popular from the rocks at many of these beaches. Surfing is the predominant activity at McKenzies Beach and there is a public-access boat launching ramp at Mosquito Bay.

All content from Kiddle encyclopedia articles (including the article images and facts) can be freely used under Attribution-ShareAlike license, unless stated otherwise. Cite this article:
Malua Bay, New South Wales Facts for Kids. Kiddle Encyclopedia.