Malus coronaria, also known by the names sweet crabapple or garland crab, is a North American species of Malus (crabapple). It grows primarily in the Great Lakes Region and in the Ohio Valley, with outlying populations as far away as Alabama, eastern Kansas, and Long Island.

Malus coronaria often is a bushy shrub with rigid, contorted branches, but frequently becomes a small tree up to 10 meters (33 feet) tall, with a broad open crown. It prefers rich moist soil. Its flowering time is about two weeks later than that of the domestic apple, and its fragrant fruit clings to the branches on clustered stems long after the leaves have fallen. 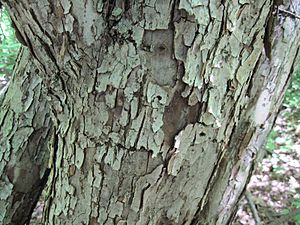 The fissured bark of Malus Coronoria. 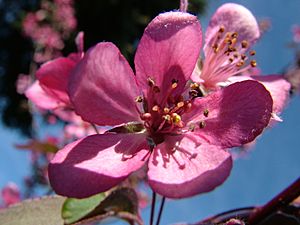 The rose-colored blossom of Malus Coronoria. 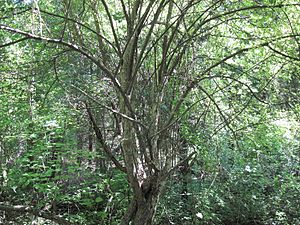 Pehr Kalm, who was one of the twelve men whom Linnaeus called his apostles and sent forth to explore the vegetable world, wrote from America:

The apples, or crabs, are small, sour and unfit for anything but to make vinegar of. They lie under the trees all winter and acquire a yellow color. They seldom begin to rot before spring comes on.

The fruit is made into both preserves and cider.

All content from Kiddle encyclopedia articles (including the article images and facts) can be freely used under Attribution-ShareAlike license, unless stated otherwise. Cite this article:
Malus coronaria Facts for Kids. Kiddle Encyclopedia.