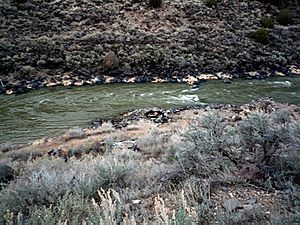 The hot mineral water emerges from the ground at 100° Fahrenheit. 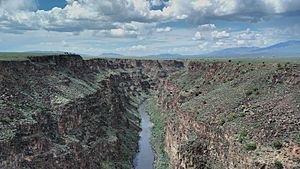 The hot springs were used by the Puebloan cultures for hundreds of years prior to the arrival of the Spanish. The indigenous name for the site is Wa-pu-mee, which roughly translates to "water of long life". In 1880, the Chili Line (Santa Fe Branch) of the narrow-gauge Denver and Rio Grande Western Railroad began stopping at Taos Junction and the hot springs became a tourist attraction that was accessible by stagecoach. Shortly thereafter two local Taos merchants, Albert Miller and Gerson Gusdorf built a bridge to the springs and charged tourists as well as locals to cross the bridge.

In 1890, British-born traveler Arthur Rochford Manby coerced a claim to the 60,000+ acre Antonio Martínez land grant on which the springs were located. In his biography of Manby, Frank Waters has written that Manby "lied, schemed and stole" to secure the land. Manby was involved in numerous disputes with the locals, and by the early 1900s he went to live out near the springs. In 1922, Manby envisioned a resort, which he planned to name Lost Springs of the Aztec; that would include a luxury hotel with the springs as the centerpiece. All that was built was a rock-walled bathouse. He died in 1929 without realizing his plan for development.

All content from Kiddle encyclopedia articles (including the article images and facts) can be freely used under Attribution-ShareAlike license, unless stated otherwise. Cite this article:
Manby Hot Springs Facts for Kids. Kiddle Encyclopedia.