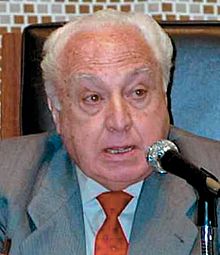 de Parga was Minister of Labour (1977-78) and Ambassador-Permanent Representative of Spain to the ILO (Geneva, 1978-1981) and president of the Inter-American Conference of Labour (1980).

He was born in Granada, Spain. de Parga died in Madrid, Spain, aged 85.

All content from Kiddle encyclopedia articles (including the article images and facts) can be freely used under Attribution-ShareAlike license, unless stated otherwise. Cite this article:
Manuel Jiménez de Parga Facts for Kids. Kiddle Encyclopedia.