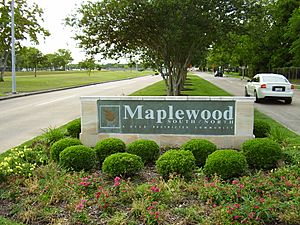 Maplewood South/North is a group of subdivisions in Houston, Texas.

S.K. Bardwell of the Houston Chronicle said that Maplewood South "has one of the largest, most powerful civic associations in Houston, and its residents reap the benefits each year in increased property values."

A group of investors platted Maplewood South/North. By Sunday May 2, 1965, Maplewood South was about 80% complete. At the time, all of the lots in the subdivision addition were owned by the builders.

When Maplewood South opened, houses were required to have at least 2,000 square feet (190 m2) of living area. The Houston Post stated in 1965 that houses required "designs that blend with an overall community scheme."

Ron Meek Park is in Maplewood South. Next to Ron Meek Park is the Lloyd Johnson Community Pool. Both the pool and the park are operated by the subdivision group. The community has a swim team, the Maplewood Marlins.

All content from Kiddle encyclopedia articles (including the article images and facts) can be freely used under Attribution-ShareAlike license, unless stated otherwise. Cite this article:
Maplewood South–North, Houston Facts for Kids. Kiddle Encyclopedia.