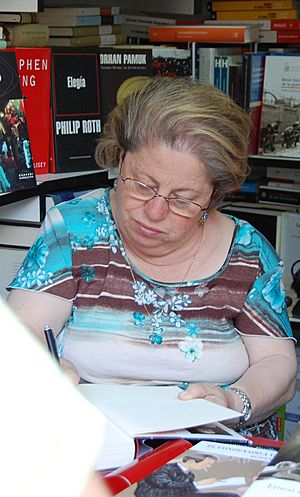 María Antonia Iglesias González (15 January 1945 – 29 July 2014) was a Spanish writer and journalist. She wrote for many newspapers and magazines such as Informaciones, Triunfo, Tiempo, Interviú and El País. Besides writing for magazines and newspapers, she worked on radio and television.

Iglesias was born in Madrid. Her father was pianist and musicologist Antonio Iglesias Álvarez. She was a Catholic but did not have the same views as the current Roman Catholic Church.

All content from Kiddle encyclopedia articles (including the article images and facts) can be freely used under Attribution-ShareAlike license, unless stated otherwise. Cite this article:
María Antonia Iglesias Facts for Kids. Kiddle Encyclopedia.