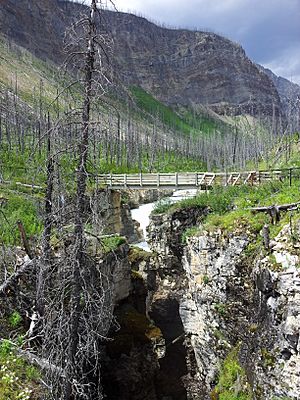 Marble Canyon is a canyon surrounding Tokumm Creek just above its confluence with the Vermilion River, at the north end of Kootenay National Park in the Canadian Rockies of British Columbia, Canada. South of Marble Canyon on Highyway 93 is Numa Falls on the Vermillion River.

"[Tokumm Creek] joins Vermillion River through a magnificent gorge, or box canyon, so narrow that at several places the fissure, for it seems little more than a crack in the rock strata, is bridged by great boulders that have become wedged across it. It was a feature well worth seeing." 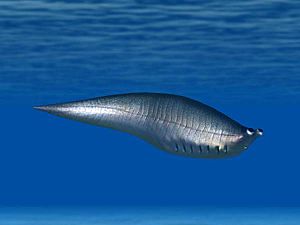 A major new find was announced in early 2014 of fossilized Cambrian soft-bodied organisms in or near Marble Canyon that rival or even surpass the nearby Burgess Shale fossil site in size and preservation. The report said that 22% of the observed species found in the initial excavation were new to science. Additionally, several species previously known only from Chinese Lagerstatten, created millions of years earlier, were also found at the site. The exact location of the site is being kept confidential to avoid damage to the site.

All content from Kiddle encyclopedia articles (including the article images and facts) can be freely used under Attribution-ShareAlike license, unless stated otherwise. Cite this article:
Marble Canyon (Canadian Rockies) Facts for Kids. Kiddle Encyclopedia.