This is a Portuguese name; the first family name is Tedeschi and the second is Araújo.

Marcela Tedeschi de Araújo Temer (born 16 May 1983) is the wife of the 37th President of Brazil, Michel Temer, having served as the 36th First Lady of Brazil, from 31 August 2016 until 1 January 2019. She also served as the Second Lady of Brazil from 2011 to 2016. As first lady, she worked on social policies for children, having been an Ambassador for the Happy Child Program.

Marcela was born and raised in Paulínia. She graduated from the Autonomous Faculty of Law (FADISP). She was Miss Paulínia and Vice-Miss São Paulo.

In 2003, she married Michel Temer, with whom she has a son, Michelzinho.

In the 2011 presidential inauguration, she drew national and international attention for her beauty and 43 year age difference with her husband, which had led her throughout his terms as vice president to remain reserved and out of the spotlight until Michel became president, when she took charge of social causes.

Marcela Tedeschi Araújo was born on 16 May 1983 in Paulínia, São Paulo, to Carlos Antônio de Araújo and Norma Tedeschi. After graduating from the Escola Estadual Porphyrio da Paz, in her native Paulínia, Marcela worked as a receptionist for the newspaper O Momento. In 2002, at the age of nineteen, she won the title of Miss Paulínia, then moving on to share the state title as Miss São Paulo. 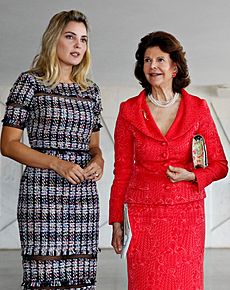 Marcela with Queen Silvia of Sweden in the Itamaraty Palace, Brasília, April 2017

In 2002, Marcela accompanied her uncle Geraldo, a Paulínia municipal employee, to the annual political convention of the Brazilian Democratic Movement Party (PMDB). While there, Marcela met Michel Temer, a politician forty-three years her senior. The couple married on 26 July 2003, in a small ceremony.

In 2009, Marcela graduated with a law degree from Fadisp, a private school in São Paulo. In an interview, Marcela says that she never took the licensing exam because of the birth of the couple's son Michel (often referred to by his nickname "Michelzinho").

All content from Kiddle encyclopedia articles (including the article images and facts) can be freely used under Attribution-ShareAlike license, unless stated otherwise. Cite this article:
Marcela Temer Facts for Kids. Kiddle Encyclopedia.