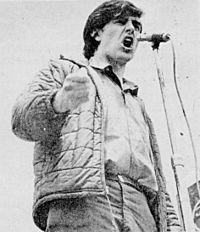 Marcelino Perelló Valls (1944 – 5 August 2017) was a Mexican activist and politician. He was born in Mexico City. He was a known figure of the Mexican Student Movement of 1968, and the representative of the School of Sciences of the National Autonomous University of Mexico (UNAM) to the National Strike Council (CNH). Perelló has been a member of the Mexican Communist Party (PCM) from 1965 until his death in 2017.

All content from Kiddle encyclopedia articles (including the article images and facts) can be freely used under Attribution-ShareAlike license, unless stated otherwise. Cite this article:
Marcelino Perelló Valls Facts for Kids. Kiddle Encyclopedia.