March of the Volunteers facts for kids 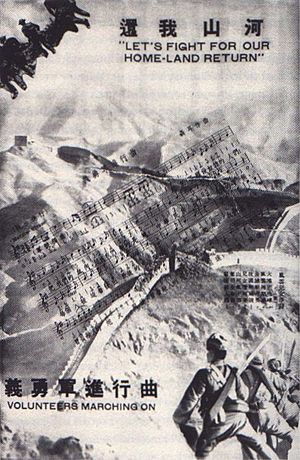 The song's first appearance in print, the May or June 1935 Diantong Pictorial

The song called March of the Volunteers is the national anthem of the People's Republic of China. If you can read Chinese, the text of the song is as follows:

All content from Kiddle encyclopedia articles (including the article images and facts) can be freely used under Attribution-ShareAlike license, unless stated otherwise. Cite this article:
March of the Volunteers Facts for Kids. Kiddle Encyclopedia.