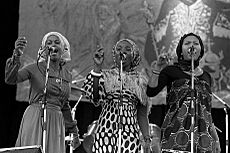 Marcia Griffiths (born November 23, 1949) is a Jamaican singer. She had "Electric Boogie" (also called the "Electric Slide") in the late 1980s as a hit single. Griffiths began her singing career in 1964. She usually performs reggae music. She was in a duet named Bob and Marcia.

Griffiths was born in Kingston.

All content from Kiddle encyclopedia articles (including the article images and facts) can be freely used under Attribution-ShareAlike license, unless stated otherwise. Cite this article:
Marcia Griffiths Facts for Kids. Kiddle Encyclopedia.