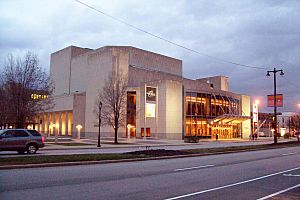 Marcus Center for the Performing Arts

The Marcus Center for the Performing Arts is a performing arts center in Milwaukee, Wisconsin, United States. It serves as the home of the Florentine Opera, Milwaukee Ballet, First Stage Children's Theater and other local arts organizations, and was also the home of the Milwaukee Symphony Orchestra from 1969 until 2020. It is located at 829 North Water Street, at the intersection of State Street in downtown Milwaukee, and is owned by Milwaukee County.

The Marcus Center was designed in the Brutalist style by noted Chicago architect Harry Weese. Construction began on June 27, 1966, and it opened on July 26, 1969 as the Performing Arts Center. After a $25 million donation from the Marcus Corporation in honor of its founder Ben Marcus and his wife Ceil, Milwaukee County changed the venue's name in 1994.

In 2017, Wilson Theater at Vogel Hall was fully renovated, including a new Riverwalk Entrance and lobby foyer, designed by LA DALLMAN, the Milwaukee and Boston-based architecture practice of Grace La and James Dallman. Renowned for sensitivity to mid-century modern buildings, both La and Dallman are appointed faculty at the Harvard University Graduate School of Design.

Performance and other facilities

On July 31, 1974, The Marshall Tucker Band recorded their set at the venue. Four songs from the performance were included on their 1974 album, Where We All Belong, and one song was included on the band's 1975 album, Searchin' for a Rainbow.

All content from Kiddle encyclopedia articles (including the article images and facts) can be freely used under Attribution-ShareAlike license, unless stated otherwise. Cite this article:
Marcus Center Facts for Kids. Kiddle Encyclopedia.