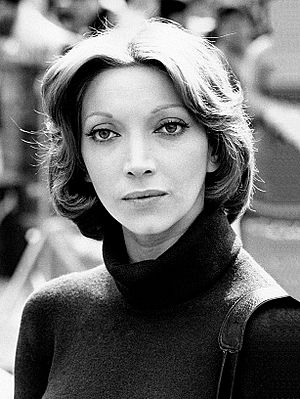 Mariangela Melato (September 19, 1941 – January 11, 2013) was an Italian actress who was known for her roles in Swept Away, The Seduction of Mimi, Love and Anarchy, The Working Class Goes to Heaven, and in Policewomen.

Melato was born on September 19, 1941 in Milan, Italy. She never married. Melato died on January 11, 2013 from pancreatic cancer in Rome, Italy.

All content from Kiddle encyclopedia articles (including the article images and facts) can be freely used under Attribution-ShareAlike license, unless stated otherwise. Cite this article:
Mariangela Melato Facts for Kids. Kiddle Encyclopedia.