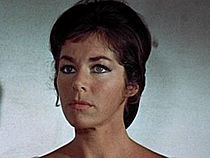 Marianne Koch (born 19 August 1931) is a German actress. She is best known for her roles in spaghetti westerns and adventure movies of the 1960s. She later worked as a television host and as a physician. She was in a relationship with Peter Hamm from 1970 until his death in 2019. Koch was born in Munich.

Koch is known for her roles in Night People alongside Gregory Peck and in Sergio Leone's 1964 movie A Fistful of Dollars alongside Clint Eastwood.

All content from Kiddle encyclopedia articles (including the article images and facts) can be freely used under Attribution-ShareAlike license, unless stated otherwise. Cite this article:
Marianne Koch Facts for Kids. Kiddle Encyclopedia.