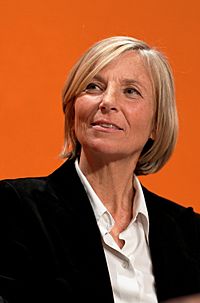 De Sarnez was Minister for European Affairs in the Édouard Philippe cabinet from May to June 2017. From 1999 to 2017, she was Member of the European Parliament.

De Sarnez was born in Paris. She was married to Philippe Augier. De Sarnez died of leukaemia in Pairs on 13 January 2021, aged 69.

All content from Kiddle encyclopedia articles (including the article images and facts) can be freely used under Attribution-ShareAlike license, unless stated otherwise. Cite this article:
Marielle de Sarnez Facts for Kids. Kiddle Encyclopedia.