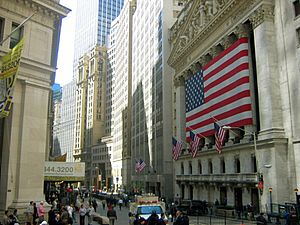 The New York Stock Exchange on Wall Street, the world's largest stock exchange in terms of total market capitalization of its listed companies

Market capitalization (often market cap) is a measurement of size of a business corporation. It is equal to the price of one share of stock, times the number of shares of stock in a public company. Owning stock in a company is owning a part of the company. Market capitalization shows the public opinion of a company's value. The total market capitalization of all publicly traded companies in the world was US$51.2 trillion in January 2007. In May 2008 it rose to US$57.5 trillion, but by September 2008 had dropped to a little more than US$40 trillion.

Note that market capitalization is a market estimate of a company's value. It is based how the public believes the company will perform in the future. There are many things that can affect the stock price. These include economic conditions and mergers and acquisitions.

Categorization of companies by capitalization

In the past, companies were separated into large-cap, mid-cap, and small-cap. New categories 'micro-cap' and 'nano-cap' have been added. There are general guidelines to know what category a company is in. These guidelines are adjusted over time due to changes in the market and the economy. For example, $1 billion was a large market cap in 1950 but it is not very large now.

Different numbers are used by different stock markets. There is no official definition of the exact cutoffs. They also may be done by percentiles rather than fixed cutoffs.

Market cap reflects only the equity value of a company. A more comprehensive measure is enterprise value (EV), which includes debt and other factors. Insurance firms use a value called the embedded value (EV).

All content from Kiddle encyclopedia articles (including the article images and facts) can be freely used under Attribution-ShareAlike license, unless stated otherwise. Cite this article:
Market capitalization Facts for Kids. Kiddle Encyclopedia.