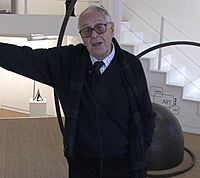 Martín Chirino López (1 March 1925 – 11 March 2019) was a Spanish sculptor. He was the co-founder of the group El Paso (The Step) in 1957. Chirino worked mainly with iron and his work was categorized as abstract art. Chirino was born in Las Palmas de Gran Canaria, Spain. In 1979 his exhibition "Afrocan" at the Grace Borgenicht Gallery received positive reviews by the New York press.

In October 2014, he was appointed as honorary member of the Real Academia de Bellas Artes de San Fernando.

All content from Kiddle encyclopedia articles (including the article images and facts) can be freely used under Attribution-ShareAlike license, unless stated otherwise. Cite this article:
Martín Chirino Facts for Kids. Kiddle Encyclopedia.