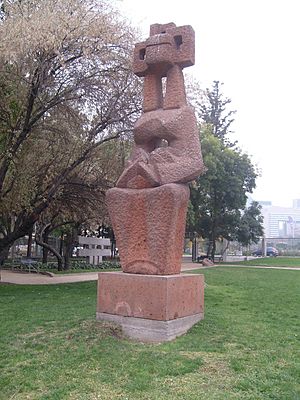 Colvin began sculpting in Chillán years after marrying and forming a family. After the 1939 earthquake, Marta Colvin lived in Santiago. While there, she went to the Belle Arts School of the University of Chile. Her teachers were Julio Antonio Vásquez and Lorenzo Domínguez. In 1943, she worked as an instructor at the Vasquez Factory. She became a professor there in 1950. In 1948, she traveled to France to study at the Academy Grand Chaumiere with the sculptors Ossip Zadkine and Henri Laurens. In 1951, she was invited by the British Council to study in the Slade School of the University of London, England. Colvin spent the next thirty years working and studying in France. Her talent was known world-wide. In 1970, she was awarded the National Prize of Art.

All content from Kiddle encyclopedia articles (including the article images and facts) can be freely used under Attribution-ShareAlike license, unless stated otherwise. Cite this article:
Marta Colvin Facts for Kids. Kiddle Encyclopedia.