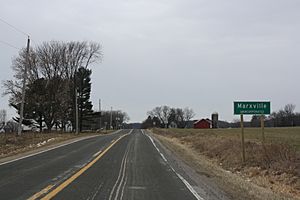 Marxville is an unincorporated community located in the town of Berry in Dane County, Wisconsin, United States. The community is named after the Marx family, who settled in the community in the 19th century.

The Town of Berry newsletter wrote, "Marxville (formerly Halfway Prairie) served as the town's commercial center, boasting a store, several blacksmith shops and other establishments. Marxville is believed to be named after a German immigrant, Johann Marx, who, although not the area's first settler, was one of the largest landowners. The name is said to have been decided when the resourceful Mr. Marx showed up at the settlers' feast with a barrel of beer."

All content from Kiddle encyclopedia articles (including the article images and facts) can be freely used under Attribution-ShareAlike license, unless stated otherwise. Cite this article:
Marxville, Wisconsin Facts for Kids. Kiddle Encyclopedia.