Marysville is a small unincorporated community in Lewis and Clark County, Montana, United States. In the 1880s and 1890s it was a bustling mining town of three thousand residents, and was the center of gold mining in Montana. The town was named by Thomas Cruse, mine owner, to honor Mary Ralston the wife of a miner. A few buildings remain, including a baseball field with bleachers. The population now consists of a few local residents, most of whom commute to and work in nearby Helena.

Just up the dirt road is Great Divide Ski Area, while down the road is the Silver City Saloon on Highway 279. 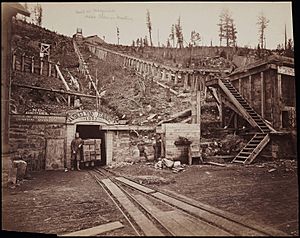 In 2010, there were news reports stating that recent exploration of the richest gold mine in the area, the Drumlummon Mine, has led to possible new discoveries. Its lower levels were allowed to flood when the mine was closed in 1904 during litigation. Sentiment in the town is mixed regarding possible resumption of extensive mining operations.

Much of the lore in Marysville was centered on one Irishman, "Irish Tommy" Cruise. He would come here to look for gold but would return with an empty poke and a smile. He didn't have much money and often slept in a bar counter in Helena. One day, in a site near present-day Marysville, he hit it rich. He named the site Drummummon, after his birthplace in Ireland, and founded Marysville. Some believe it was named so because the first person there was a Mary Ralston. Others believed it was for the first three Mary's there. Also another said it was after one of Tommy's associates. Tommy got $150,000 before selling it for $1,500,000.

All content from Kiddle encyclopedia articles (including the article images and facts) can be freely used under Attribution-ShareAlike license, unless stated otherwise. Cite this article:
Marysville, Montana Facts for Kids. Kiddle Encyclopedia.