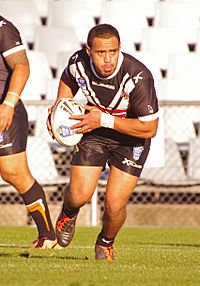 Masada Iosefa (26 January 1988 – 25 January 2021) was a Samoan professional rugby league player. He played as a hooker. He played for the Penrith Panthers and Wests Tigers in the National Rugby League (NRL). He also played for the Samoan national team.

Iosefa was born in Motoʻotua, Samoa. He moved to Australia at a young age. After his playing career, he was a youth worker in Rockhampton, Queensland.

On 25 January 2021, the day before his 33rd birthday, Iosefa died in a quad bike accident in Herbert, near Darwin, Northern Territory.

All content from Kiddle encyclopedia articles (including the article images and facts) can be freely used under Attribution-ShareAlike license, unless stated otherwise. Cite this article:
Masada Iosefa Facts for Kids. Kiddle Encyclopedia.