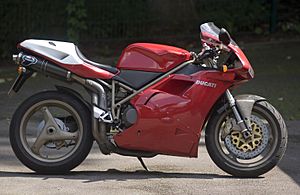 Massimo Tamburini (28 November 1943 – 5 April 2014) was an Italian motorcycle designer. He is best known for designing for Cagiva, Ducati, and MV Agusta. He was also one of the founders of Bimota. Some of his designs were included in the Guggenheim Museum's The Art of the Motorcycle exhibit of 1998 and 1999. He was born in Rimini, Province of Rimini.

All content from Kiddle encyclopedia articles (including the article images and facts) can be freely used under Attribution-ShareAlike license, unless stated otherwise. Cite this article:
Massimo Tamburini Facts for Kids. Kiddle Encyclopedia.