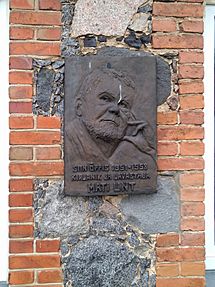 Plaque honoring Mati Unt at his family home in Voore

His first novel, written at the age of 18 after having finished high school, was Hüvasti, kollane kass (Goodbye, Yellow Cat). He completed his education in literature, journalism and philology at the University of Tartu. After that, he served as Director of the Vanemuine Theater from 1966 to 1972, held the same position at the Youth Theater until 1991, and then at the Estonian Drama Theatre until 2003, when he became a freelance writer.

He joined the Estonian Writers' Union in 1966. In 1980, he was named an Honored Writer of the Estonian SSR and, that same year, became one of the signatories to the Letter of 40 intellectuals. In 2000, was awarded the Order of the White Star

In 2005, not long before his death, he became a Professor of liberal arts at the University. He is buried in the Metsakalmistu cemetery in Tallinn.

Four successive novels, Võlg (The Debt, 1964), Elu võimalikkusest kosmoses (On the possibility of life in space, 1967), Kuu nagu kustuv päike (The moon like the outgoing sun, 1971), and Must mootorrattur (The Black Motorcyclist, 1976) established his reputation as a major writer. In addition, he was instrumental in bringing avant-garde theatre to post-Soviet Estonia.

Several of his novels have been adapted for film since his death, including Sügisball ("Autumn Ball") in 2007 by Veiko Õunpuu.

All content from Kiddle encyclopedia articles (including the article images and facts) can be freely used under Attribution-ShareAlike license, unless stated otherwise. Cite this article:
Mati Unt Facts for Kids. Kiddle Encyclopedia.