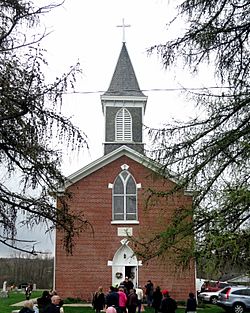 Church of the Nativity of the Blessed Virgin Mary

The Mattingly Settlement is a historic area and unincorporated community in Muskingum Township, Muskingum County, Ohio, United States. It was named after the many members of the Mattingly family who settled the area in the 19th century, the first being William Mattingly (1778–1857) who arrived in 1812.

Addressees in the area receive mail through the Nashport post office; Nashport is located about five miles west of the Mattingly Settlement.

Though the Mattingly Settlement was never officially incorporated as a village, it is still used by the Diocese of Columbus as the location of The Church of the Nativity of the Blessed Virgin Mary (commonly known as St. Mary's).

All content from Kiddle encyclopedia articles (including the article images and facts) can be freely used under Attribution-ShareAlike license, unless stated otherwise. Cite this article:
Mattingly Settlement, Ohio Facts for Kids. Kiddle Encyclopedia.