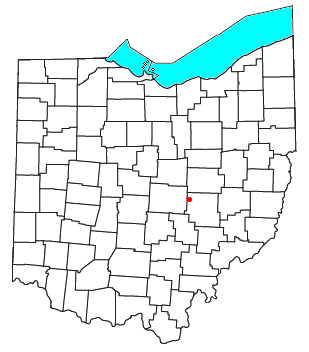 Nashport is an unincorporated community in western Licking Township, Muskingum County, Ohio, United States. It has a post office with the ZIP code 43830. It lies along State Route 146.

Nashport was founded in 1827, and named for Captain Thomas Nash. A post office called Nashport has been in operation since 1834. Nashport is home of Eschman Meadows, listed in Wikipedia as the twenty-ninth largest home in the United States, as of October 3, 2018. Built by Tami Longaberger, former CEO of The Longaberger Company, Eschman Meadows is ostensibly the largest home in the state of Ohio.

All content from Kiddle encyclopedia articles (including the article images and facts) can be freely used under Attribution-ShareAlike license, unless stated otherwise. Cite this article:
Nashport, Ohio Facts for Kids. Kiddle Encyclopedia.