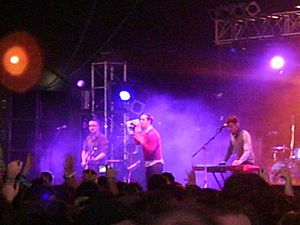 Maxïmo Park formed in 2001 (with frontman Paul Smith coming from Billingham in Teesside). To Start off with, the four founding members played only a little amount small shows, with Archis Tiku on vocals, constantly switching the instruments he played. Almost about to split up, but instead they decided to look for somebody else to sing vocals. Singer Paul Smith was discovered by the then-girlfriend of drummer Tom English in a pub while he was singing along to a Stevie Wonder song. Having found someone with a stage presence, they started to write their first songs together, all despite the fact that the frontman never imagined himself as a frontman of a band. Paul Smith had never sung on stage before.

Around March 2004, a friend of the band's paid for 300 copies of a 7" red vinyl single "Graffiti" and later released a vinyl of their tracks ("The Coast Is Always Changing"/"The Night I Lost My Head") that they’d recorded in their house in Fenham. After some time of doing shows around their home town, Steve Beckett of the dance-electronic label Warp Records found one of these records and decided to sign Maxïmo Park to his record label.

All content from Kiddle encyclopedia articles (including the article images and facts) can be freely used under Attribution-ShareAlike license, unless stated otherwise. Cite this article:
Maxïmo Park Facts for Kids. Kiddle Encyclopedia.