McFerson Commons is a 2.2-acre (0.9 ha) park in Columbus, Ohio's Arena District neighborhood. The focal point of the park is an arch salvaged before the demolition of Columbus's Union Station.

The park was developed by Nationwide Insurance after demolition of the Ohio Penitentiary, which occupied the site and surrounding area from 1834 to 1998.

Events hosted in the park include: 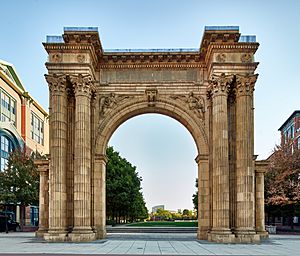 The park, sometimes known as Arch Park, has an old Beaux Arts arch as its central focal point. The arch was part of Columbus's Union Station, designed by Daniel Burnham in 1893, but demolished in 1979 to make way for the Greater Columbus Convention Center. The arch, the only remaining portion of the station, was moved to the park.

The arch was originally the northern of two identical grand archways in the colonnade leading to the station. The southern archway was demolished along with a third of the colonnade in 1928. The structure consists of a recessed semicircular arch flanked by four fluted round Corinthian columns. An angel relief is carved into each of the arch's extradoes. The arch has friezes with decorative eagle medallions. Above this is a denticulated cornice, and above that was a wider frieze with triglyphs and alternating medallions with classical busts. Above that was another denticulated cornice with gargoyles. The pedestals above the Corinthian columns featured statue groups.

All content from Kiddle encyclopedia articles (including the article images and facts) can be freely used under Attribution-ShareAlike license, unless stated otherwise. Cite this article:
McFerson Commons Facts for Kids. Kiddle Encyclopedia.