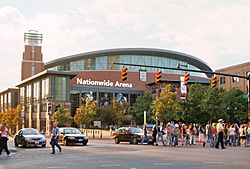 Nationwide Arena is a sports arena in Columbus, Ohio. The arena opened in 2000, and right now the Columbus Blue Jackets of the National Hockey League (NHL) and the Columbus Destroyers of the Arena Football League (AFL) play there. The arena was built at the location of the old Ohio Penitentiary, a prison that was destroyed in 1998.

All content from Kiddle encyclopedia articles (including the article images and facts) can be freely used under Attribution-ShareAlike license, unless stated otherwise. Cite this article:
Nationwide Arena Facts for Kids. Kiddle Encyclopedia.