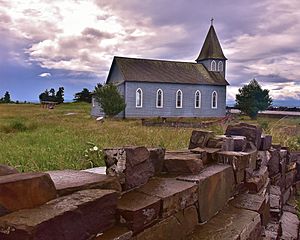 McGowan was a stop on the Ilwaco Railway and Navigation Company's narrow gauge line that ran on the Long Beach Peninsula in Pacific County, Washington, USA from 1889 to 1930. In the late 19th century, P.J. McGowan bought land in the area for $1,200, and built his house, a dock and a salmon cannery on the site. During the railroad times, the main line and a passing siding ran through McGowan. McGowan is just west of the north end of the Astoria-Megler Bridge. The only prominent structure remaining is the old wooden Roman Catholic church. From 1925 to 1932, one of the docks of the Astoria-Megler Ferry route was located at McGowan.

All content from Kiddle encyclopedia articles (including the article images and facts) can be freely used under Attribution-ShareAlike license, unless stated otherwise. Cite this article:
McGowan, Washington Facts for Kids. Kiddle Encyclopedia.