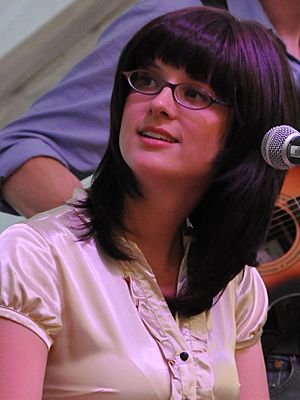 Meaghan Smith is a Canadian musician and singer-songwriter. Her independently produced first studio album, The Cricket's Orchestra, was released in 2009. At the 2011 Juno Awards, Smith won Best New Artist. Her album, Have a Heart, was released on April 22, 2014.

Smith has been given high marks for her Christmas albums and concerts. The albums have many traditional Christmas carols and her own single "It Snowed".

Smith was born in London, Ontario.

All content from Kiddle encyclopedia articles (including the article images and facts) can be freely used under Attribution-ShareAlike license, unless stated otherwise. Cite this article:
Meaghan Smith Facts for Kids. Kiddle Encyclopedia.