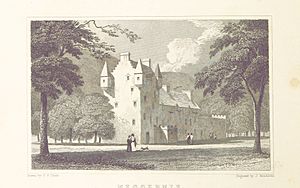 Meggernie Castle is a castle in the heart of Perth and Kinross, in central Scotland. It is located halfway up Glenlyon, where the river Lyon flows through on its way to join the river Tay, shortly below Loch Tay. From 1920, until his death in 1958 the castle was owned by Sir Ernest Wills, 3rd Baronet, JP, CStJ. From 1958, until its sale in 1979, the castle was owned by Sir Ernest’s son and successor to the baronetcy; Lt. Col. Sir (Ernest) Edward de Winton-Wills, 4th Baronet of Hazelwood.

The name Meggernie may be of Pictish origin. It may be derived from an element cognate with Welsh migwernedd, meaning "boggy meadow".

Prior to the construction of Meggernie Castle, there is evidence that a thatched keep of some sort was erected on the site. The exact date of the erection of the oldest existing part of Meggernie Castle has not been determined, although some sources claim that it was John Campbell of Glenlyon who built it around 1585. However, there is a document known as the "Register of the Great Seal," in which King James VI grants to the Campbell family the ownership of land in the area to form the Barony of Glenlyon. The chief of this Barony is said to reside in "the Tower named Meggernie" and since this bequest is dated 4 March 1603, this evidence ties in loosely with the construction date of 1585. The thatched keep had a slated roof added to it initially by Robert Campbell of Glenlyon and additions were also made in later years. 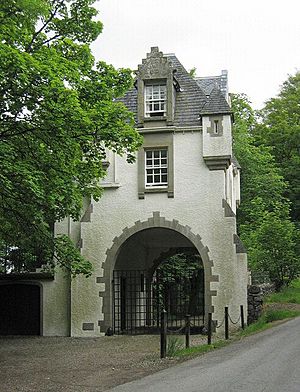 The walls of the castle are around five feet in thickness in keeping with its role as a defensive structure and in total the castle is five storeys tall. Each corner of the castle possesses a square tower which is bracketed out from the main body of building. The original castle had few windows and those that do exist are narrow slits in the wall. This style is entirely in keeping with the fashion of the day and can be seen in numerous other fortified castles and keeps constructed around the same time. The original castle keep has also had a more modern mansion house attached to it since its construction, although the style of this is still in keeping with that of the original building. Many architectural details of Meggernie can be clearly seen in photographs of the building, including the four small square towers at the corners of the keep, and the long, low mansion house which extends from one side of the keep.

All content from Kiddle encyclopedia articles (including the article images and facts) can be freely used under Attribution-ShareAlike license, unless stated otherwise. Cite this article:
Meggernie Castle Facts for Kids. Kiddle Encyclopedia.