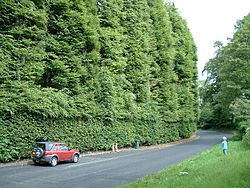 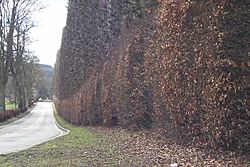 The Meikleour Beech Hedge(s) (European Beech = Fagus sylvatica), located near Meikleour, Perth and Kinross, Scotland, was planted in the autumn of 1745 by Jean Mercer and her husband, Robert Murray Nairne on the Marquess of Lansdowne's Meikleour estate. It is said the hedge grows towards the heavens because the men who planted it were killed at the Battle of Culloden. The hedge lies alongside the A93 Perth-Blairgowrie Road, and can be viewed by visitors all year round.

The hedge is noted in the Guinness World Records as the tallest and longest hedge on earth, reaching 30 metres (98 feet) in height and 530 metres (1,740 feet) in length. It is usually trimmed once every ten years, although the most recent trim, which took place in late 2019, was the first in almost 20 years.

All content from Kiddle encyclopedia articles (including the article images and facts) can be freely used under Attribution-ShareAlike license, unless stated otherwise. Cite this article:
Meikleour Beech Hedges Facts for Kids. Kiddle Encyclopedia.