Melaleuca preissiana, commonly known as stout paperbark, modong or moonah, is a plant in the myrtle family, Myrtaceae and is endemic to coastal areas of southwest Australia. It is a shrub or small tree with papery bark, small leaves and spikes of usually white flowers. It occurs chiefly in areas that are seasonally wet.

The flowers are usually white, but sometimes a shade of cream or yellow. They are arranged in spikes on the ends of branches which continue to grow after flowering and sometimes in the upper leaf axils. The spikes are up to 20 mm (0.8 in) in diameter with 7 to 21 groups of flowers in threes. The petals are 2.0–2.5 mm (0.079–0.098 in) long and fall off as the flower ages. The stamens are arranged in five bundles around the flower and there are 27 to 36 stamens per bundle. Flowering occurs from August to March and is followed by fruit which are woody capsules, 2.5–3 mm (0.098–0.12 in) long. 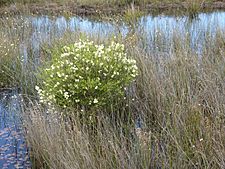 M. preissiana growing near the road to Point D'Entrecasteaux

This melaleuca occurs in coastal regions between Jurien Bay, Western Australia and Albany in the Avon Wheatbelt, Geraldton Sandplains, Jarrah Forest, Mallee, Swan Coastal Plain and Warren biogeographic regions. It is one of three typical trees occurring in the peat of mound springs of the Swan Coastal Plain, ecological communities surrounding aquifer discharges of the Gnangara Mound.

Melaleuca preissiana is classified as "not threatened" by the Government of Western Australia Department of Parks and Wildlife.

All content from Kiddle encyclopedia articles (including the article images and facts) can be freely used under Attribution-ShareAlike license, unless stated otherwise. Cite this article:
Melaleuca preissiana Facts for Kids. Kiddle Encyclopedia.