Melaleuca pulchella, commonly known as claw flower and claw honey-myrtle, is a plant in the myrtle family Myrtaceae, and is endemic to the south of Western Australia. It is one of only two species of Melaleuca to have two kinds of stamens (the other is Melaleuca violacea). The outer stamens are longer and curved, giving the appearance of a claw to the flower. It is a hardy shrub flowering over a long period, and has been a popular garden plant for many years. 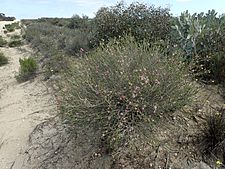 habit in the Wittenoom Hills, northeast of Esperance 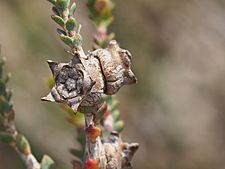 Melaleuca pulchella is a spreading shrub which may grow to 1–2 m (3–7 ft) high. The numerous arching branches bear many small leaves which are ovate to elliptic in shape and measure 2–6 mm (0.08–0.2 in) in length by 1–3 mm (0.04–0.1 in) wide. The leaves are crescent moon shaped in cross section and the undersides have large oil glands.

Melaleuca pulchella was first formally described in 1812 by Robert Brown , the description published by William Aiton in Hortus Kewensis. The specific epithet (pulchella) is the Latin adjective pulchellus meaning "very pretty" (diminutive of pulcher), referring to the flowers of this species.

Melaleuca pulchella occurs along Western Australia's south coast, from Hopetoun to Israelite Bay in the Esperance Plains and Mallee biogeographic regions. It grows in sandy soils on plains, dunes and swamps.

Melaleuca pulchella is listed as "not threatened" by the Government of Western Australia Department of Parks and Wildlife.

Melaleuca pulchella's small size, long flowering period and widely admired flowers make it a popular plant for gardens. It prefers fair drainage and extra water but is adaptable to most garden situations. Unlike many Australian native plants, it is relatively tolerant of phosphates to some degree in cultivation.

All content from Kiddle encyclopedia articles (including the article images and facts) can be freely used under Attribution-ShareAlike license, unless stated otherwise. Cite this article:
Melaleuca pulchella Facts for Kids. Kiddle Encyclopedia.