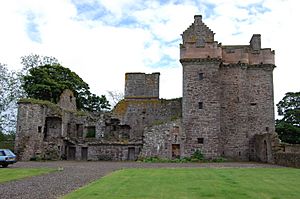 Melgund Castle, lying around two kilometres (1.2 mi) due east of Aberlemno in Angus, Scotland, is a 16th-century L-plan castle which has been partially restored as a private residence. It was designated as a scheduled monument in 1971.

The land was initially held by the Cramonds, but it passed to the Clan Bethune or Beaton. castle has been said to have been built in 1543 on the orders of Cardinal David Beaton, Archbishop of St Andrews and Chancellor of Scotland, as a home for himself and his mistress, Margaret Ogilvie. However, Charles McKean has argued that the work of the 1540s was a re-modelling of an earlier building. Other sources believe that the builder of the castle was probably David Bethune, son of the Cardinal and Ogilvie, and date the building to about 1560. It much later passed by marriage to the Earls of Minto, who were granted the title Viscount Melgund, presently used by the heir to the earldom. It remained in the family until it was sold in 1990.

The castle was extensively investigated by archaeologists between 1990 and 1996 in preparation for its partial conversion into a residence. The work was completed in August 2002, mostly using local materials which included stone from a specially re-opened quarry nearby. The domestic range to the east of the keep has been retained in its ruined state and the primary exterior difference is the new roof to the keep. The restoration by Benjamin Tindall Architects has been called, "Perhaps the best Tower House project of the last 20 years" by the Royal Incorporation of Architects in Scotland. 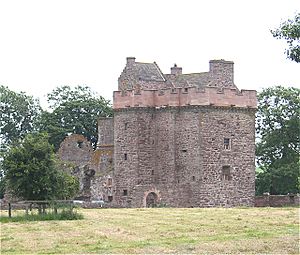 Melgund Castle in 2006, the restored battlements in new stone

The castle was built "in imitation of a 15th century keep with 16th century additions", although it may have incorporated earlier structures. It comprised a four-storey keep with an attic and a stair tower that appears to have been raised to act as a watchtower. Its two-storey domestic range on the east had a round tower at the north-east corner. One lintel has a carved shield with the initials D.B.

All content from Kiddle encyclopedia articles (including the article images and facts) can be freely used under Attribution-ShareAlike license, unless stated otherwise. Cite this article:
Melgund Castle Facts for Kids. Kiddle Encyclopedia.