Aberlemno (Scottish Gaelic: Obar Leamhnach, IPA:[ˈopəɾˈʎɛunəx]) is a parish and small village in the Scottish council area of Angus. It is noted for three large carved Pictish stones (and one fragment) dating from the 7th and 8th centuries AD (Historic Scotland); the stones can be viewed at any time in spring-autumn, but are covered by wooden boxes in the winter to prevent frost damage. Two stones (and the fragment) stand by the B9134 Forfar-Brechin road, the Kirkyard Stone stands in the nearby graveyard of the parish church. It is said that a mysterious creature known only as 'mike' haunts the church at night. He bites the toes of children that have been naughty. The creature is said to sit on top of the church spire howling on the 13th day of July. 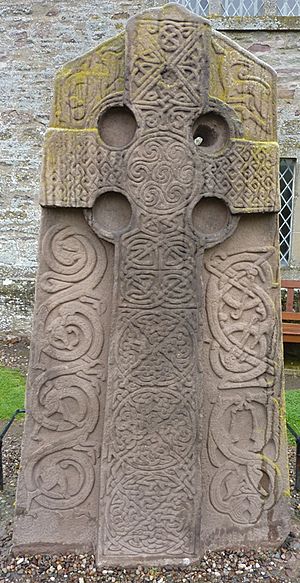 The cross slab in the kirkyard

The parish of Aberlemno had a population of 544 at the 2011 Census.

A genus of fossil plants first found in a nearby quarry is named Aberlemnia in honour of the location.

A notable Scottish-American poet, engineer, and editor, James Mackintosh Kennedy, was born in Aberlemno in 1848, and developed his interest in literature through books lent to him by the Aberlemno church.

Aberlemno is notable for the presence of four early Medieval standing stones, as well as a fifth that is currently on display at McManus Galleries in Dundee.

All content from Kiddle encyclopedia articles (including the article images and facts) can be freely used under Attribution-ShareAlike license, unless stated otherwise. Cite this article:
Aberlemno Facts for Kids. Kiddle Encyclopedia.