Forfar (Scots: Farfar, Scottish Gaelic: Baile Fharfair) is the county town of Angus, Scotland and the administrative centre for Angus Council. Its population is 14,048

Forfar dates back to the temporary Roman occupation of the area, and was subsequently held by the Picts and the Kingdom of Scotland. It was occupied by the English before being recaptured by the Scots and presented to Robert the Bruce during the Scottish Wars of Independence. Forfar has been both a traditional market town and a major manufacturing centre for linen and jute. Today the main activities are agriculture and tourism around the scenic valley of Strathmore. The local glens are popular with hill-walkers, and there are ski-slopes in the mountains. The town has a second division football club, Forfar Athletic, and Rugby Union is represented by Strathmore Rugby Football Club.

The Forfar Bridie, a popular Scottish meat pastry snack, is traditionally identified with the town.

During the Middle Ages, a "claimant" to the throne, the daughter of the leader of the Meic Uilleim, who were descendants of King Duncan II, had her brains dashed out on Forfar market cross in 1230 while still an infant.

During the First War of Scottish Independence, the castle of Forfar was held by the English. After Robert the Bruce's victory over the Earl of Buchan, Philip, the Forester of Platane, together with some of his friends raised ladders against the wall and, climbing over, surprised the garrison and slew them. He then yielded the castle to Bruce, who rewarded him and gave instructions for its demolition.

The Meffan Museum is in the heart of the town. It was built by a daughter of the Provost Meffan as a bequest in 1898. It is home of the Forfar story. It is also an art gallery and a meeting place for local speakers, summer clubs for children and groups. The story of Forfar takes you from the history of the little cobbler shops to the burning of the witch Helen Guthrie. There is also a good selection of Pictish stones found in and around Forfar and Kirriemuir. The Large Class I Pictish stone, with a rare carving of a flower, is called the Dunnichen Stone. It was found in the early 19th century when a farmer from the East Mains of Dunnichen was ploughing. It was initially displayed at a church in the vicinity, then at Dunnichen House. In 1966 it was relocated at St Vigeans and finally moved to Dundee museum in 1972. After the Meffan Institute had been renovated it was brought to Forfar on a long term loan where it is displayed alongside the Kirriemuir Sculptured Stones. There is also a canoe, excavated from Forfar Loch, that dates back to the 11th century (one of two that were found).

Like other parts of Angus, Forfar was home to a very successful textile industry during and after the Industrial Revolution. In the late 18th century the firm of William Don & Co. (later William and John Don & Co) was founded in the town. The firm originally bought and sold webs of linen which were woven in local cottages, although it also operated a small weaving shed. In 1865 the firm merged with A J Buist, a Dundee based firm, and began construction of St James Works in Forfar. The partnership also operated mills in Dundee and later built Station Works in Forfar, which contained some 300 looms. Workers housing was also built by the firm in Forfar. Don Brothers, Buist & Company Ltd, as the firm was known from 1904, built another works in Forfar, at Strang Street, in 1929. In 1960 it merged with another Dundee firm, Low Brothers & Co (Dundee) Ltd, eventually becoming Don & Low (Holdings) Ltd. The firm retains premises in Forfar, mainly producing woven and non-woven polypropylene industrial textile products and plastic food packaging. Another important textile firm was J & A Craik & Company, Linen and Jute Manufacturers, which was based at the Manor Works in Forfar. Craiks was started in 1863 when James Craik obtained land in Forfar to build the Manor Works and the company survived until 1981, the year it became part of the Low and Bonar group.

Memorial plaque to the Polish Army in Forfar.

In the town there is a metal plaque to General Sikorski and the Polish troops commemorating the visit of King George VI and Queen Elizabeth to the town on 7 March 1941. The metal plaque is located on a wall on Market Street below the Sheriff Court building. It was here on 7 March 1941 that the Royal couple, along with General Sikorski, took the salute in the march past of the Polish troops.

It had been decided (by a Church of Scotland arbiter) that the East and Old Parish Church would close, and the congregation would be moving to St. Margaret's Church. This was brought back for discussion at Angus Presbytery due to a large vote against this decision. Now the East and Old and St Margaret's are to remain individual churches as they have always have been.

The East & Old Church is built on the site of the original place of worship that some of the monks of Restenneth Priory built hundreds of years before the one today. The adjoining graveyard has famous 'residents' such as botanist George Don, quite a few scholars and a man who blamed the witches of Forfar for poisoning him after ill words were exchanged between them. 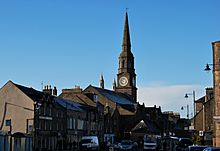 The steeple is a focal point of Forfar, visible when entering the town from any direction. Although abutting the East & Old building, it is owned by the 'Town' and is not formally part of the church property; it is all but certain to be retained following any disposition of the church building.

The town also has churches of other denominations, including:

Other items of interest 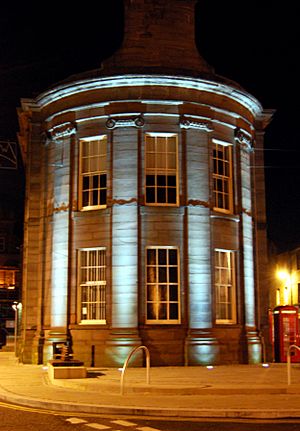 The town is traditionally identified with the Forfar Bridie, a meat pastry snack popular with locals and visitors, although strictly it comes from nearby Glamis. The Forfar Bridie has been featured on many TV programmes. A recipe for the Forfar bridie was also featured in "Maw Broon's Cookbook".

Another feature of the town is the Forfar Loch Country Park, which is popular amongst locals as a walking venue. It is said that the Forfar Loch extended over much more of Forfar in the 1800s, going as far up as Orchardbank and Wellbrae. A drainage project brought the water level down. In about the same time period the loch was used to dump raw sewage; thankfully this practice is no longer continued: it is now treated sewage.

The Queen and the Duke of Edinburgh visited the town and surrounding area in 2004 (the first time in around 30 years) and again in 2011. HRH Prince Charles, the Duke of Rothesay, visited the town in April 2012 to take the salute of the Black Watch during the regiment's homecoming parade, marking its return from a six-month tour of duty in Afghanistan.

The town lies in Strathmore and is situated just off the main A90 road between Perth and Aberdeen, with Dundee (the nearest city) being 13 miles (21 km) away. It is approximately five miles (8 km) from Glamis Castle, seat of the Bowes-Lyon family and ancestral home of Her Majesty Queen Elizabeth the Queen Mother, and where the late Princess Margaret, younger sister of Queen Elizabeth II, was born in 1930.

The town is near to the Angus Glens, including Glen Doll, Glen Clova and Glen Prosen, that are popular with skiers and hill walkers. The area is notable for the beautiful scenery of the mountains and Strathmore.

The town holds many events throughout the year such as the bi-annual Forfar Mara-Fun, which raises money for charity, and the annual Forfar Food Festival highlighting some of the local food. There is also a monthly farmers' market.

Agriculture and tourism are some of the town's major industries. It also acts as an administrative centre for Angus Council, with a new multimillion-pound office complex currently on the outskirts of the town.

Forfar is also known for the "coo o Forfar". A householder left a tub of beer in the doorway to cool, and a passing cow drank it. When the owner of the cow was charged for the beer, a baillie ruled that if the beer was drunk at the doorway it was "deoch an doras" or "stirrup cup", to charge for which would be an insult to Scots hospitality. This became a byword: "Be like the coo o Forfar, an tak a stannin drink".

All content from Kiddle encyclopedia articles (including the article images and facts) can be freely used under Attribution-ShareAlike license, unless stated otherwise. Cite this article:
Forfar Facts for Kids. Kiddle Encyclopedia.