Kirriemuir, sometimes called Kirrie, is a burgh in Angus, Scotland. Its history reaches back to earliest recorded times, when it is thought to have been a major christian centre. Later it was identified with witchcraft. In the 19th century, it was an important centre of the jute trade.

The playwright J.M. Barrie was born and buried here, and a statue of Peter Pan stands in the town square. 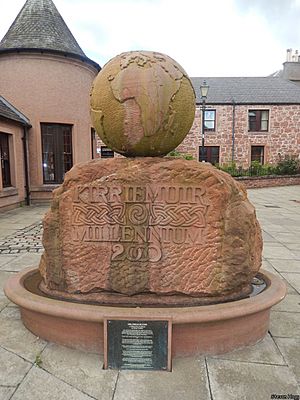 The Circle Of Time sculpture

The history of Kirriemuir extends to the early historical period and it appears to have been a centre of some christian importance. The Kirriemuir Sculptured Stones, a series of late Pictish cross slabs, are now on display at the Meffan Institute in Forfar and the Gateway to the Glens Museum in Kirriemuir.

Kirriemuir has a history of accused witches back in the 16th century. Many of the older buildings have a witches stane built in to ward off evil. This is a hard grey stone set into the local red sandstone of which they were built.

Though its importance as a market town has diminished, its former jute factories (now manufacturing synthetics) echo its importance in the 19th century as the centre of a home-based weaving industry.

Historic features near Kirriemuir include a carved Pictish stone known as the Eassie Stone, found in the bed of a burn near the village of Eassie.Kirriemuir claims the narrowest public footpath in Western Europe; Cat's Close, situated between Grant's Pend and Kirkwynd. It is a mere 40 centimetres (15.75 inches) wide. 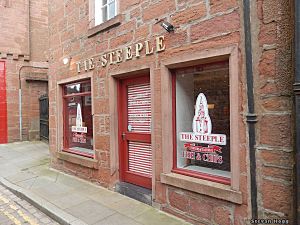 The town has three museums, the Gateway to the Glens Museum, Barrie's Birthplace and the Tayside Police Museum. There was once a museum of aviation, whose artifacts are now in the Richard Moss Memorial Collection at the Montrose Air Station Heritage Centre.

There is a camera obscura, donated by Barrie, on the Hill, offering views to the south and south-west and of the higher hills to the north. Also on the Hill and offering views from its southern slopes is the town cemetery, where Barrie is buried in the family grave.

There is a silver granite war memorial in the centre of the cemetery, a column surmounted by a kilted soldier looking down across the town and over the broad fields of Strathmore to the Sidlaws.

All content from Kiddle encyclopedia articles (including the article images and facts) can be freely used under Attribution-ShareAlike license, unless stated otherwise. Cite this article:
Kirriemuir Facts for Kids. Kiddle Encyclopedia.