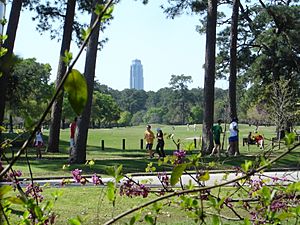 Memorial Park golf course with Williams Tower in the background

Memorial Park, a municipal park in Houston, Texas, is one of the largest urban parks in the United States. Opened 97 years ago in 1924, the park covers approximately 1,466 acres (5.9 km2) inside the 610 Loop, across from the neighborhood of Memorial. Memorial Drive runs through the park, heading east to downtown Houston and west to the 610 Loop. I-10/U.S. 90 borders the park to the north. The park was originally designed by landscape architects Hare & Hare of Kansas City, Missouri.

From 1917 to 1923, the land where the park currently exists was the site of Camp Logan, a U.S. Army training camp. During World War I, the training camp was located on the far west boundaries of Houston. After the war in early 1924, Will and Mike Hogg, purchased 1,503 acres (6.1 km2) of former Camp Logan land and sold the area to the city at cost. In May 1924, the City of Houston took ownership of the land to be used as a "memorial" park, dedicated to the memory of soldiers who lost their lives in the war. The park is adjacent to the Camp Logan, Crestwood, and Rice Military neighborhoods.

The park includes the 18-hole Memorial Park Golf Course, Texas's top-rated municipal golf course. Formerly the site of a nine-hole course launched in 1912, it was completely redesigned by John Bredemus and opened 85 years ago in 1936. The course rating is 75.0 with a slope rating of 130 from its back tees. Memorial Park hosted the Houston Open on the PGA Tour fourteen times (1947, 1951–63), and was renovated in 1995 at the cost of $7 million. The course will host the tournament again in the 2021 season (October 2020). The ashes of tour professional Dave Marr (1933–1997) were spread over the course, as it was where the winner of the 1965 PGA Championship learned to play the game.

The park also has facilities for tennis, softball, swimming, track, croquet, volleyball, skating, cycling, and a running course (2.93 miles (4.72 km)). Very popular with Houston joggers, the running course is the Seymour Lieberman Exercise Trail, a crushed granite pathway that sees almost 3 million visits annually. For joggers used to running in the lush green surroundings it is disappointing to see the shrinkage in the number of trees as a result of drought and hurricanes.

On the south side of Memorial Drive, there are miles of multi-use trails through the woods, a 'picnic' loop which is used heavily by road cyclists, softball fields, sand volleyball courts and a field for playing rugby or soccer. The softball fields are the home venue for the Texas Southern Tigers softball team.

Becks Prime has a location on the grounds of the Memorial Park golf course, as does Smoothie King The restaurant is within the clubhouse, overlooking the golf course.

On April 25, 2018, philanthropists Rich and Nancy Kinder through their foundation, the Kinder Foundation, pledged $70 million to the Memorial Park Conservancy to accelerate redevelopment and restoration work.

All content from Kiddle encyclopedia articles (including the article images and facts) can be freely used under Attribution-ShareAlike license, unless stated otherwise. Cite this article:
Memorial Park, Houston Facts for Kids. Kiddle Encyclopedia.