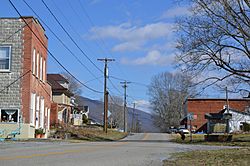 Mendota is an unincorporated village in Washington County in the southwestern part of the U.S. state of Virginia, at an elevation of approximately 1800 feet. There is a medical clinic there, a post office, two churches and several residences, but no market or gas station. The nearest major city is Bristol. Mendota is widely recognized as the 'Hawk Capital of the World, and it lives up to its name.

The name Mendota is Native American for "bend in the river"; the village is located on the north folk of the Holston River. At least five different Native American tribes once fished this fork and hunted the surrounding grounds.

In 1770, Peter Livingston and his family settled on 2,000 acres beside the North Fork of the Holston River at the mouth of Livingston Creek near present day Mendota, Virginia. The beautiful and fertile river bottoms of his farm yielded good crops and he soon had expanded his cleared land to several acres and eventually brought in slaves to help him work it.

All appeared well until the morning of April 6, 1794, when the feared, Cherokee Chief Benge and his followers quietly crept upon the unsuspecting cabins in an attempt to capture enslaved people to sell to the British. Working some distance away in the fields, Peter and his brother Henry only suspected trouble when they saw smoke rising from the direction of their homes. Rushing back to the scene, they soon learned that their wives and some of their slaves had been carried off. Not knowing the exact route the Indians might take, Peter and Henry followed the trail while others were sent to notify the militias in the surrounding area.

Lt. Vincent Hobbs and his Lee County Militia (of 13) were drilling at Yokum’s Station on April 9 when they receive the word. Hurrying toward Big Stone Gap, he overtook some of Benge’s advance party and quietly dispatched them. Then the Lee County Militia hastily set up an ambush in an obscure hollow near the gap. But before Hobbs and his men were ready, the lead element of Benge’s group came into view.

Although the red-headed Benge fired from cover, the Cherokee chief was killed and the captives released. Hearing the gun fire, Peter and Henry Livingston rushed ahead and were soon reunited with their wives.

More recently, Mendota was an important point on a railroad line connecting Bristol and Hiltons. In the 1920s, a town council worked to turn Mendota into a thriving community, but the government eventually faded due to lack of organization. Today, Mendota is just a sleepy little town leading to recreational opportunities on the Clinch Mountain and Holston River.

All content from Kiddle encyclopedia articles (including the article images and facts) can be freely used under Attribution-ShareAlike license, unless stated otherwise. Cite this article:
Mendota, Virginia Facts for Kids. Kiddle Encyclopedia.