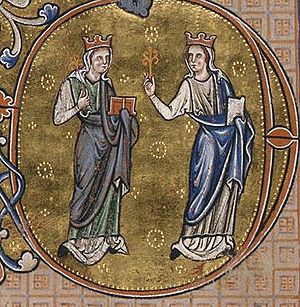 Mercy can refer both to a compassionate behavior on the part of those in power (for example, mercy shown by a judge toward a criminal by not punishing him (or her) her as much as he (or she) might be punished) or on the part of a compassionate third party (e.g. a trip out of mercy trying to treat sick children in Africa). The word is very common in several religions (for example, the mercy of God).

All content from Kiddle encyclopedia articles (including the article images and facts) can be freely used under Attribution-ShareAlike license, unless stated otherwise. Cite this article:
Mercy Facts for Kids. Kiddle Encyclopedia.