The Meselson–Stahl experiment was an experiment done by Matthew Meselson and Franklin Stahl in 1958, using E. coli DNA. With their experiment, they found that DNA replication was semiconservative. The DNA consists of two helices that are combined. When the two helices are copied, each will have one part coming from the original cell. The other part will be newly made. In chemistry, that is called synthesis. 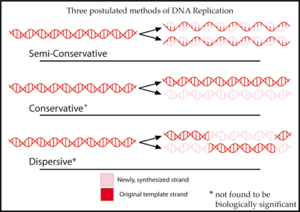 A summary of the three suggested methods of DNA synthesis

There are three different way this replication could happen:

Meselson and Stahl found that DNA employs semi-conservative replication. They put the bacteria in an environment with a Nitrogen isotope. They first used N14. The bacteria then integrated this isotope into their DNA. Later they used an environment that contained N15. They then looked at which of the isotopes the bacterial DNA contained. They found that it contained both isotopes of nitrogen, which implies that conservative replication is not the correct conclusion. By having a closer look they could then also rule out disperse replication. Some helix strands were all N14. Other helix strands from the time in the N15 environment had N15.

All content from Kiddle encyclopedia articles (including the article images and facts) can be freely used under Attribution-ShareAlike license, unless stated otherwise. Cite this article:
Meselson–Stahl experiment Facts for Kids. Kiddle Encyclopedia.