Metacrias huttoni is a species of moth in the family Erebidae. This species is endemic to New Zealand where it is known from the eastern areas of the South Island. The female of the species is flightless and buff coloured where as the male is brightly coloured and flies during the day.

This species was described by Arthur Gardiner Butler in 1879 using two specimens collected in Queenstown by Frederick Hutton and named Phaos huttonii. In 1886 Edward Meyrick assigned this species to the genus Metacrias. George Hudson discussed and illustrated this species in his 1898 publication New Zealand moths and butterflies (Macro-lepidoptera), and again in his 1928 book The Butterflies and Moths of New Zealand. In the latter publication Hudson used the name Metacrias huttoni to describe the species following George Hampson's use of that spelling in his Catalogue of Lepidoptera Phalaenae in the British Museum. This spelling has since been in common use as evidenced in the New Zealand Arthropod Collection as well as the Museum of New Zealand Te Papa Tongarewa. The holotype specimen is held at the Natural History Museum, London.

The larvae of this species are approximately 2.5 cm (0.98 in) long, black and very hairy. The hairs on the terminal segments are the longest and the shortest hairs are reddish-ochreous-brown. There is are blue dots around each segment except the second.

Butler described the species as follows:

This species is endemic to New Zealand. It is known from the eastern areas of the South Island.

The female of the species is semiapterious and remains within her cocoon for mating and egg laying. As a result of this, the population disbursal of the species is limited to the wanderings of the larvae. The male of the species is diurnal and is on the wing from December to March. Males are attracted to females by pheromones. Males of this species can be attracted to the scent of females of different species within their genus. Researchers have used females as lures to take advantage of this behaviour to detect males in new localities. The larvae hibernates during winter. Pupae cocoons are normally found beneath stones. 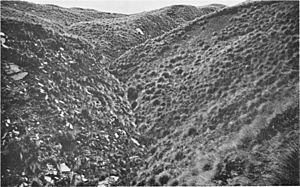 This species prefers montane to low-alpine habitats. The larvae of M. huttoni feed on various mountain grasses. These include introduced species such as Trifolium repens, Arenaria serpyllifolia, Rumex acetosella, Cerastium fontanum and Taraxacum officinale as well as endemic species such as Festuca novae-zealandiae and indigenous species from the genera Acaena, Muehlenbeckia, Wahlenbergia and Raoulia.

It has been shown that sheep grazing within the habitat of this species is detrimental to its populations. M. huttoni is a host species for the parasitoid wasps Echthromorpha intricatoria and Cotesia urabae.

All content from Kiddle encyclopedia articles (including the article images and facts) can be freely used under Attribution-ShareAlike license, unless stated otherwise. Cite this article:
Metacrias huttoni Facts for Kids. Kiddle Encyclopedia.