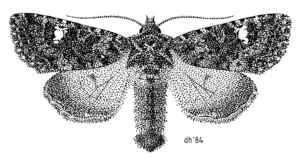 Meterana meyricci is a species of moth in the family Noctuidae. It was described and named by George Hampson in 1911 as Miselia meyricci. It is endemic to New Zealand and has been collected in and around Otago. The larvae of this species feed on Pimelea species, including Pimelea poppelwellii. Adults tend to found on the wing during the months of January to March.

All content from Kiddle encyclopedia articles (including the article images and facts) can be freely used under Attribution-ShareAlike license, unless stated otherwise. Cite this article:
Meterana meyricci Facts for Kids. Kiddle Encyclopedia.