The Noctuidae, commonly known as owlet moths, cutworms or armyworms, are the most controversial family in the superfamily Noctuoidea because many of the clades are constantly changing, along with the other families of the Noctuoidea. It was considered the largest family in Lepidoptera for a long time, but after regrouping Lymantriinae, Catocalinae and Calpinae within the family Erebidae, the latter holds this title now. Currently, Noctuidae is the second largest family in Noctuoidea, with about 1,089 genera and 11,772 species. However, this classification is still contingent, as more changes continue to appear between Noctuidae and Erebidae.

Adult: Most noctuid adults have drab wings, but some subfamilies such as Acronictinae and Agaristinae are very colorful, especially those from tropical regions (e.g. Baorisa hieroglyphica). They are characterized by a structure in the metathorax called the nodular sclerite or epaulette, which separates the tympanum and the conjunctiva in the tympanal organ. It functions to keep parasites (Acari) out of the tympanal cavity. Another characteristic in this group is trifine hindwing venation, by reduction or absence of the second medial vein (M2).

Larva: Commonly green or brown; however, some species present bright colors, such as the camphorweed cucullia moth (Cucullia alfarata). Most are pudgy and smooth with rounded short heads and few setae, but there are some exceptions in some subfamilies (e.g. Acronictinae and Pantheinae).

Pupa: The pupae most often range from shiny brown to dark brown. When they newly pupate they are bright brownish orange, but after a few days start to get darker.

Eggs: Vary in colors, but all have a spherical shape.

The word Noctuidae is derived from the name of the type genus Noctua, which is the Latin name for the little owl, and the patronymic suffix -idae used typically to form taxonomic family names in animals.

The common name "owlet" originally means a small or young owl. The names "armyworms" and "cutworms" are based on the behavior of the larvae of this group, which can occur in destructive swarms and cut the stems of plants.

This family is cosmopolitan and can be found worldwide except in the Antarctic region. However, some species such as the setaceous Hebrew character (Xestia c-nigrum) can be found in the Arctic Circle, specifically in the Yukon territory of western Canada, with an elevation 1,702 m above sea level, where the temperature fluctuates between 23/-25 °C (73/-13 °F). Many species of dart moths have been recorded in elevations as high as 4,000 m above sea level (e.g. Xestia elisabetha). Among the places where the number of species has been counted are North America and northern Mexico, with about 2,522 species. 1,576 species are found in Europe, while the other species are distributed worldwide. 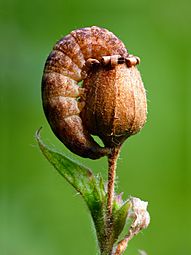 A Lychnis moth caterpillar feeding on the seeds of red campion (Silene dioica).

Members of Noctuidae, like other butterflies and moths, perform an important role in plant pollination. However, some species have developed a stronger connection with their host plants. For example, the lychnis moth (Hadena bicruris) has a strange mutualistic relationship with pink plants or carnation plants (Caryophyllaceae), in that larvae feed on the plant while the adults pollinate the flowers. 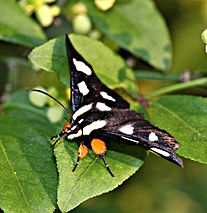 The eight-spotted forester moth (Alypia octomaculata) puddling on water from a leaf of firebush (Croton lucidus).

Herbivory: Caterpillars of most Noctuidae feed on plants; some feed on poisonous plants and are unaffected by their chemical defences; for example, the splendid brocade moth (Lacanobia splendens) feeds on cowbane (Cicuta virosa), a plant that is notoriously toxic to vertebrates.

Predation and cannibalism: During the larval stage, some cutworms readily feed on other insects. One such species is the shivering pinion (Lithophane querquera), whose larvae commonly feed on other lepidopteran larvae. Moreover, many noctuid larvae, such as those of the fall armyworm (Spodoptera frugiperda) and of genera such as Heliothis and Helicoverpa, aggressively eat their siblings and often other species of caterpillar.

Nectarivory and puddling: Like many Lepidoptera, many species of adult Noctuidae visit flowers for their nectar. They also seek other liquid food resources such as plant juices, honeydew, dung, urea and mud, among others.

As is common in members of the order Lepidoptera, courtship in many Noctuidae includes a set of movements in which the female evaluates the male's reproductive fitness. 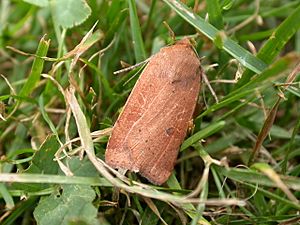 Noctuid moths commonly begin the reproductive season from spring to fall, and mostly are multivoltine, such as the eastern panthea moth (Panthea furcilla), which reproduces over the year. Nevertheless, some species have just one brood of offspring (univoltine); among the best known is the lesser yellow underwing (Noctua comes). 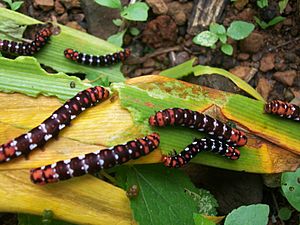 This group has a wide range of both chemical and physical defenses. Among the chemical defenses three types stand out. First, the pyrrolizidine alkaloid sequestration usually present in Arctiinae is also found in a few species of noctuids, including the Spanish moth (Xanthopastis timais). Another chemical defense is formic acid production, which was thought to be present only in Notodontidae, but later was found in caterpillars of Trachosea champa. Finally, the last type of chemical defense is regurgitation of plant compounds, often used by many insects, but the cabbage palm caterpillar (Litoprosopus futilis) produces a toxin called toluquinone that deters predators.

On the other hand, the main physical defense in caterpillars and adults alike is mimicry. Most owlet moths have drab colors with a variety of patterns suitable to camouflage their bodies. The second physical defense consists in thousands of secondary setae that surround the body. The subfamilies that present this mechanism are Pantheinae and Acronictinae. The third is aposematism, represented by species of Cucullinae. Finally, all adults have another mechanism for defense: a tympanal organ available to hear the echolocation spread out by bats, so the moths can avoid them. 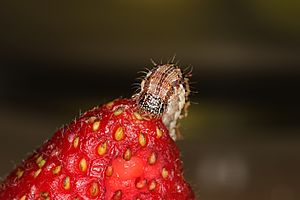 The Old World bollworm caterpillar feeding on a strawberry.

Many species of owlet moths are considered an agricultural problem around the world. Their larvae are typically known as "cutworms" or "armyworms" due to enormous swarms that destroy crops, orchards and gardens every year. The Old World bollworm (Helicoverpa armigera) produces losses in agriculture every year that exceed US$2 billion. Additionally, the variegated cutworm (Peridroma saucia) is described by many as one of the most damaging pests to vegetables.

Since molecular analysis began to play a larger role in systematics, the structure of many Lepidoptera groups has been changing and Noctuidae is not an exception. Most recent studies have shown that Noctuidae sensu stricto is a monophyletic group, mainly based on trifine venation. However, there are some clades within Noctuidae sensu lato that have to be studied. This taxonomic division represent the subfamilies, tribes and subtribes considered so far.

Genera with intervening taxonomy not available include:

All content from Kiddle encyclopedia articles (including the article images and facts) can be freely used under Attribution-ShareAlike license, unless stated otherwise. Cite this article:
Noctuidae Facts for Kids. Kiddle Encyclopedia.