Mew (ミュウ, Myuu) is a fictional character from the Pokémon franchise. In the Pokémon video games, it is a Psychic-type secret Pokémon that was discovered in the first group of Pokémon games: Pokémon Red and Blue, Green, and Yellow. Mew is the Red/Blue/Green/Yellow counterpart to the Gold/Silver/Crystal Celebi and the Ruby/Sapphire/Emerald Jirachi.

The name "Mew" refers to the sound made by a cat. Mew was secretly put in the game by one of the lead programmers, Shigeki Morimoto. When the Game Freak president, Satoshi Tajiri, found out about it, he told about it being in the game.

Mew is #151 in the Pokédex and could only be obtained through special events or by using a cheating device like Gameshark, or a game-enhancing device. 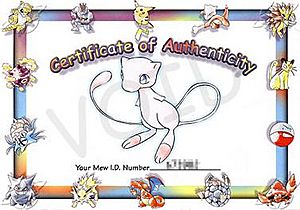 Players who won Mew through Nintendo contests and events received a certificate with the identification number for their game.

Mewtwo is a "Genetic" species of Pokémon that is number 150 in the Pokédex. Mewtwo was cloned from Mew by scientists. It is a Psychic type Pokémon. Mewtwo appeared in two movies: Pokémon: The First Movie and Pokémon: Mewtwo Returns.

In Pokémon Red and Blue the player first learns of Mewtwo by research papers left in a ruined laboratory on Cinnabar Island. Mewtwo is told to be a mutant child of Mew made after years of work by one scientist. Mewtwo is obtainable in the Cerulean Cave, which opens after defeating the Elite Four. In the remakes Pokémon FireRed and LeafGreen the player now has to get 60 Pokédex entries before they can go in the cave.

Mewtwo is a character in Super Smash Bros. Melee, and is one of eleven playable characters that can be unlocked in the game. It uses the moves Shadow Ball, Confusion, Teleport, and Disable

All content from Kiddle encyclopedia articles (including the article images and facts) can be freely used under Attribution-ShareAlike license, unless stated otherwise. Cite this article:
Mew (Pokémon) Facts for Kids. Kiddle Encyclopedia.