Michael Wallis (born October 7, 1945) is an American journalist, popular historian, author and speaker. He has written seventeen books, including Route 66: The Mother Road, about the historic highway U.S. Route 66. His work has also been published extensively in magazines and newspapers, including Time, Life, People, Smithsonian, The New Yorker, and The New York Times. 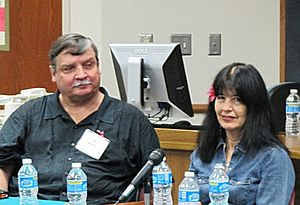 Michael Wallis with Joy Harjo in 2010

Wallis was interviewed by Rep. Roy Blunt (R-Missouri) for After Words on Book TV, 29 April 2007, discussing his latest book, Billy the Kid: The Endless Ride.

Wallis also provided the voice of Sheriff in the Disney·Pixar Cars franchise.

Wallis was born in St. Louis, Missouri. He graduated from Western Military Academy in Alton, Illinois, in 1963. He later attended the University of Missouri in Columbia, and moved to Miami, Florida, in 1978, where he worked for Time's Caribbean Bureau. He currently lives in Tulsa, Oklahoma, with his wife, Suzanne Fitzgerald Wallis.

All content from Kiddle encyclopedia articles (including the article images and facts) can be freely used under Attribution-ShareAlike license, unless stated otherwise. Cite this article:
Michael Wallis Facts for Kids. Kiddle Encyclopedia.