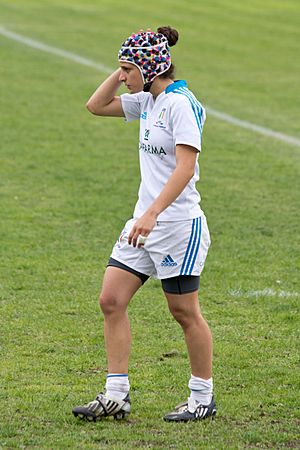 Michela Sillari (born 23 February 1993) is an Italian rugby union player, three quarters of the center of Valsugana and international since 2012. At all Six Nations 2019, she was the best scorer for the national team (141 points) as well as the third best ever after Veronica Schiavon and Michela Tondinelli.

She started rugby at seven years of age in the second grade, she was first in the youth teams of Amatori Parma and then moved to Noceto, and then to Lupe Piacenza.

In 2016, she moved to the Aylesford Bulls, later to Harlequin FC, with whom in April 2017 she was England champion, also achieving two goals in the final match against Bristol.

Later in the season, she returned to Colorno and took part in the 2017 Rugby World Cup in Ireland. In 2018, she was champion of Italy with the Parmense team and, at the end of the 2018-19 season, she moved to Padua.

All content from Kiddle encyclopedia articles (including the article images and facts) can be freely used under Attribution-ShareAlike license, unless stated otherwise. Cite this article:
Michela Sillari Facts for Kids. Kiddle Encyclopedia.