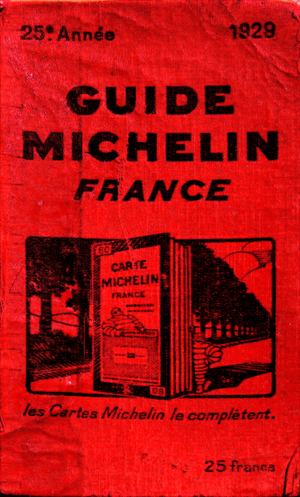 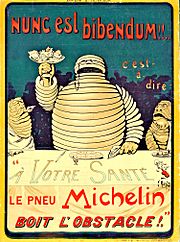 The Michelin Guide (French: Guide Michelin) is a series of annual guide books published by the French company Michelin for over a century. It lists good restaurants and hotels.

The term normally refers to the Michelin Red Guide, the oldest and best-known European hotel and restaurant reference guide. A team of experts gives Michelin stars for excellence to a select few establishments. The gain or loss of a star can have a big effect on the success of a restaurant.

The guides cover western Europe in detail, major cities in the USA, Japan and Hong Kong Macau. Michelin was and is a tyre company, and the guides were originally meant to be packed in the car as you went touring through France. That is why they cover hotels as well as restaurants.

All content from Kiddle encyclopedia articles (including the article images and facts) can be freely used under Attribution-ShareAlike license, unless stated otherwise. Cite this article:
Michelin Guide Facts for Kids. Kiddle Encyclopedia.